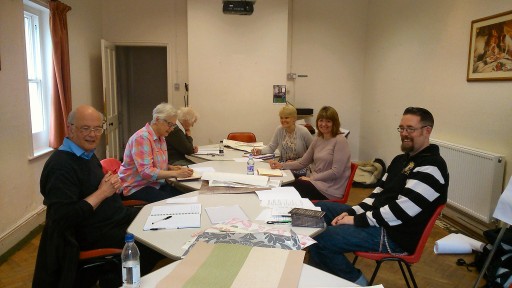 We invited Steve Toase to lead our workshop this year, which took place at the newly refurbished St Wilfrid’s Community Centre. The morning was given over to flash fiction, one of Steve’s specialities, and he gave us plenty of inspiration for a series of writing exercises. 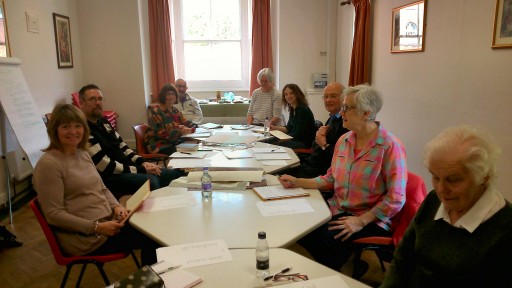 After a buffet lunch, Steve turned to the dark side and we enjoyed responding to different stimuli in order to produce edgier work. Steve was at pains to stress that dark tales don’t have to be set in conventionally sinister surroundings. A sunny pastoral scene can hold quite as much horror. Heads buzzing with ideas, we all felt that it had been a very worthwhile day.

An RWG member spreads her wings 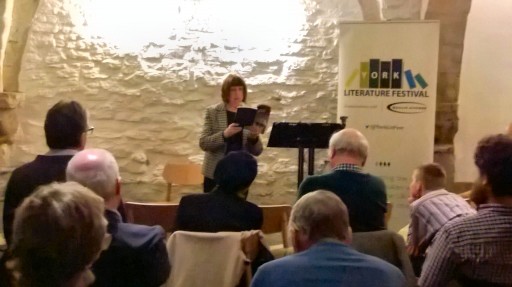 Several RWG members have a foot in more than one literary camp and here is Maggie Cobbett reading from her Anyone For Murder? collection at the York Writers’ Showcase. This was as part of the York Literature Festival HUB programme, a series of free events centred around York Theatre Royal. 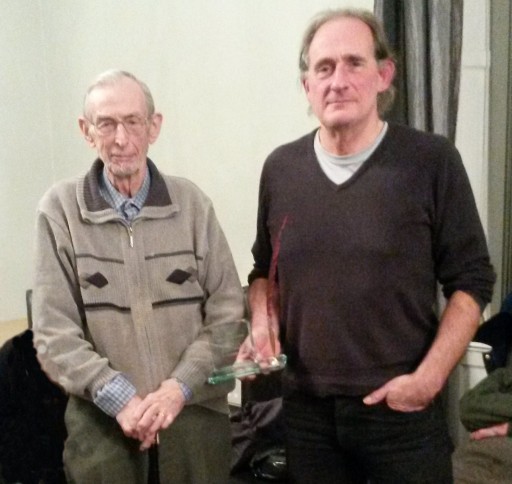 Andy began by saying that in general he despised poetry competitions because he felt that they are the antithesis of what poetry is all about. However he said that the entries in this competition felt as though they had come from a group that worked together. Particular features of the collection of entries that he liked were:
• The high craft level
• The plain language
• The use in many entries of binary organisation
• The use of alliteration
• The use of half rhymes and exact metre

Andy then went on to give his extensive comments on the thirteen individual entries before announcing the winners in reverse order as follows:
• 3rd – Susan Perkins – ‘Photophobia’ – a poem leading to the conclusion that nature as we see it is not nature
• 2nd – Phil Cook – ‘Where the North Wind Blows’ – a poem paralleling the effects of the Mistral and the effects of a new love
• 1st – David McAndrew – ‘Fixing a Memory’ – a reflection on the process of fixing a memory

Andy presented David with the trophy.

After the tea break the winners read their poems. There was then time for the following further entries to be read:
• Peter H – ‘Fiery Fantasies’ – memories of the days of coal fires and reflections on benign fires in earlier times
• Anna – ‘The Meadow’ – a poem written for friend who wanted to make a film about his meadow – describing the cycle of the meadow’s day
• Malcolm – ‘Jim’ – a fact based poem (almost a eulogy) dealing with memories of a deceased racing friend (read by Phil)
• Elizabeth S – ‘Legacy’ – a poem about the hidden legacy of a tree whose heartwood becomes the raw material for a violin maker

Sheila then invited Andy to read from his own work. He chose to read an extract from ‘Letter IV’ the latest instalment of a series of verse letters to the deceased poet Randall Swingler using a verse form derived from ‘Don Juan’. This letter updated Swingler on what is happening in the world, in particular the rising hatred of those outside the tribe (Brexit, Trump, Le Pen, etc.).

Jan summarised another successful year and thanked the Committee for assisting her. In particular, she referred to the links that had been established with poet Andy Croft and expressed the Group’s thanks to Cathy, who was stepping down as Treasurer after a very long stint. Cathy’s final act in the role was to suggest a new annual membership fee of £24 and this was accepted.

Programme ideas for the coming year were taken and further suggestions will continue to be welcomed until the start of January 2017.

Joe, as outgoing President, expressed thanks to the three members who were leaving the Committee – Jan, Cathy and Peter H – and presented them each with a small gift.

The rest of the evening was devoted to routine business and readings.

More Blasts from the Past! 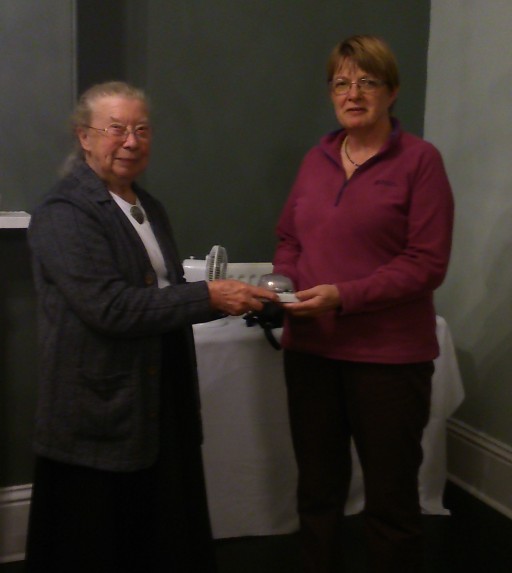 As part of our rolling programme of competitions, members always enjoy digging into the past for inspiration. This time round, the brief was to produce a piece of prose fiction with an historical theme and our adjudicator, Anne Carrick, declared herself quite stunned by the variety of themes. She began by thanking the Group for inviting her to do the job and went on to outline the three key things that she was looking for in the entries. These were a story that made her want to read to the end, believable characters and a clear plot or focus. She had found these in abundance and also enjoyed the humour in many of the stories and the restrained use of devices such as metaphor.

After giving a detailed commentary on each entry, Anne announced the winners:

Anne presented Susan with the Mary Rawnsley Trophy and then the winners read their pieces.

‘The Brightness of the Light’ told the story of an elderly American making a return visit to the Naples/Pompeii/Vesuvius area and trying to put together his memories of the time he had first visited as a merchant navy radio operator after the allied invasion of Italy in 1944.

‘Adelstrop’ was a piece inspired by the poem of the same name. During the First World War a civilian is summoned home by telegram because his mother is dying. He finds himself sharing a railway compartment with an officer in uniform – the poet – although they do not speak, not having been introduced to each other. The train makes an unwonted stop at Adelstrop at what turns out to be just the time the mother dies.

‘A Cautionary Tale’ is a story of a girl unwillingly taking part in a Saturday afternoon school visit to a museum. Asked to try on some of the replica costumes from the museum’s collection the girl detaches herself from the main party but is persuaded to dress up by one of the museum staff. In a moment of magic realism she finds herself as Anne Boleyn walking towards her beheading.

An Evening With Paul Richardson 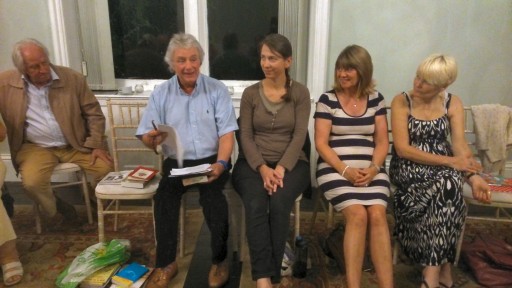 Our guest speaker, Paul Richardson, is a great raconteur and has had a very varied life from which to draw inspiration for his writing. A County Councillor for Masham for 12 years, son of a rural Northumberland vicar and a dealer in maritime art and antiques, he has published poetry and short stories and is working on a series of novels set among Native Americans. Paul has set up his own company, Talulah Publishing, and employs designers and artists to design his books.

He gave the following advice about writing:
• There are no rules
• Write down what you are feeling
• Clarity – don’t be self-indulgent
• Construction – make sure you have beginning/middle/end and keep them balanced
• Rhythm – he compared the chapters of a book to heartbeats
• Keep readers interested by ending chapters with a hook
• Characters must be nuanced

After a break for refreshments, Paul read excerpts from his novel ‘A New Beginning’, answered questions from members and signed copies of his books. 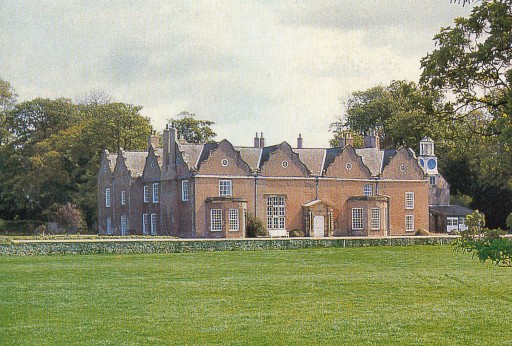 After lunch at the George in Wath, we made our way a few hundred yards down the road to Norton Conyers and spent an hour or so taking in the tranquil atmosphere of its glorious walled garden. 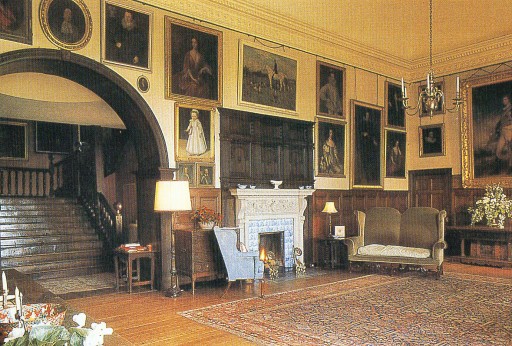 Sir James, the 11th baronet, and Lady Graham were waiting in the hall shown above and gave us a very comprehensive account of the repair and restoration programme begun in 2005, even handing round examples of their large collection of death watch beetles. Despite their own hard work and very ‘hands on’ approach, they freely admitted that none of this would have been possible without generous grants. In 2014, Norton Conyers won the Historic Houses Association/Sotheby’s Restoration Award.

This ‘gentleman’s manor-house’, owned by the Graham family for almost four hundred years, is thought to have inspired much of Charlotte Brontë’s description of Thornfield Hall. What is certain is that she visited it before she wrote Jane Eyre and must have heard the 18th century legend of a mad woman confined in one of its attics. Some time later, the staircase was blocked off and only rediscovered in 2004. The floor up there being too fragile for visitors, we had to content ourselves with a glimpse up the stairs from the door on the landing. There was, however, a photograph on display of a sparsely furnished and cheerless garret.

Fortunately, there was plenty more to see, including fine furniture, pictures, porcelain, 16th century painted boards and even a sample of mid 18th century wallpaper, now copied and commercially available as ‘Norton Conyers Diamonds’. Some rooms are light and airy but others, including the landing, decidedly gloomy. One of these is the dark panelled bedroom in which the future James II and his wife Mary of Modena may have slept during their visit to Norton Conyers in November 1679.

Each generation of the Graham family has made changes at Norton Conyers and the current owners are no exception to this. Their website is http://www.nortonconyers.org.uk/