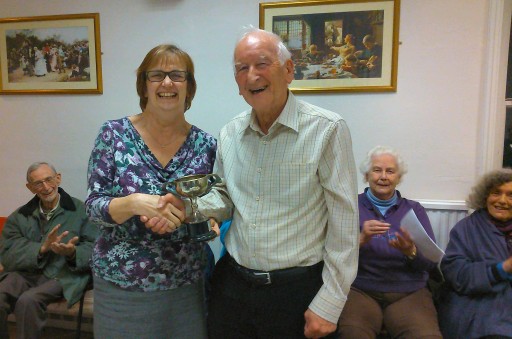 Exceptionally, this meeting was held in the St Wilfrid’s Community Centre. With adjudicator Ann Powell unable to join us, Jan passed on her general comments and invited entrants in no particular order to read out their own mini-sagas. The results were as follows:

• 3rd – Maggie with ‘Pique’ – how a rejected marriage proposal might have sealed the fate of Dresden during WW2
• 2nd – Cathy with ‘The Death of Earth’ – an evacuee from our dying planet thinks of those left behind
• 1st – Phil with ‘Oops!’ – a very literary response to a loving email message sent to the wrong Jason

Jan presented Phil with the trophy.

The other entries were:

• Peter H – ‘Kick Back’ – a couple split up
• Peter P – ‘The Witch’ – a community finds a novel way to solve the problem of a bored witch causing havoc
• Sheila – ‘Death, Where is Thy Sting’ – don’t use a frying pan to kill a wasp if it is on your partner’s head
• Kate (read by Cathy) – ‘Adrift’ – a hospital visit
• Joe – ‘A Family’s Secret’ – memories of visits to the writer’s family in Lincolnshire
• Janet – ‘The Stuff of Fairy Tales’ – the true feelings of a couple at an engagement announcement press call
• Claire – ‘The Catastrophic Collapse of Colchester in 1648’ – factual – the origins of the ‘Humpty Dumpty’ story in the fall of Royalist Colchester to the
Roundheads in 1648
• Carol – ‘Innocence and Experience’ – a reflection on the lure of the apple
• Julie – ‘Journey’s End, New Beginning’ – a woman finally admits that she is in labour at the end of pregnancy
• Caroline – ‘Today’ – ‘Will he come? Yes, the wheelie bin will get emptied this week.’
• Anna – ‘One Lie or Two, Darling?’ – a tale of double duplicity
• Susan – ‘How Being Full of Your Own Self-importance Can Make You Overlook the Obvious and be Unaware of What’s Under Your Nose’ – a neighbour saga