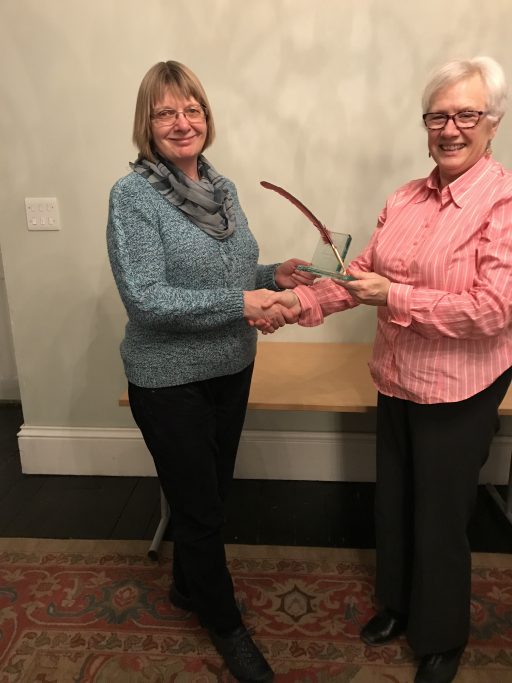 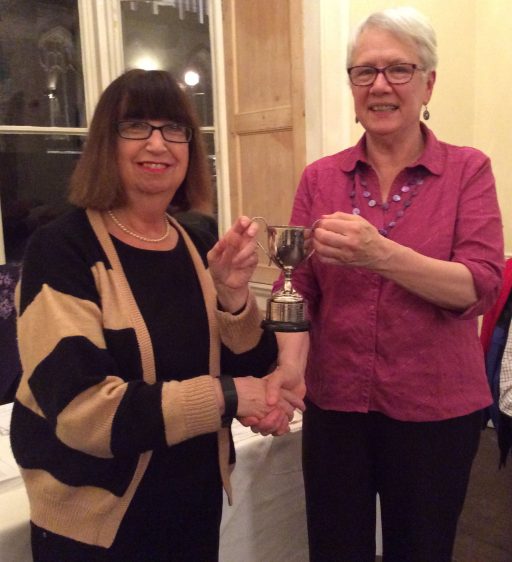 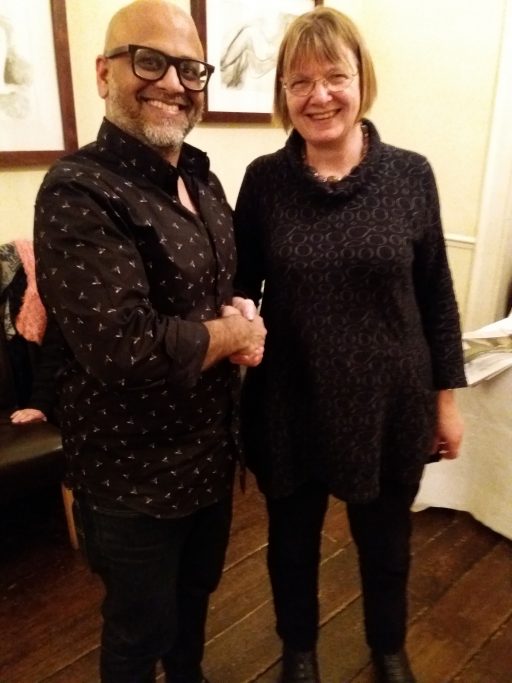 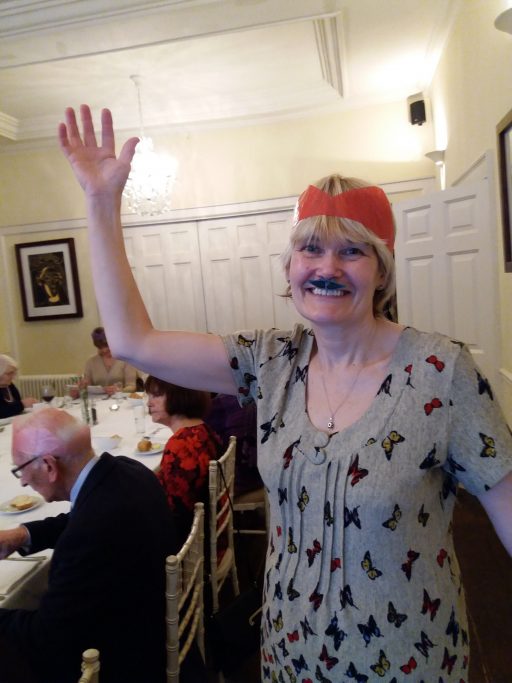 In a departure from previous years, our main festive celebration was held after Christmas. The Deanery provided a delicious lunch, there was plenty of time to relax and enjoy chat and laughter.

Everyone attempted the Chairman’s Challenge, which was a Shakespeare quiz in honour of the date. Susan Perkins won a small prize for the highest score.

Phil, Peter H and Sheila gave us their ‘party piece’, a famous Shakespearean speech brought up to date.

Everyone said they had enjoyed themselves. Considering that we all met just after 12.30 and didn’t start leaving until 3.30, that was probably true!

Click on the photos below to see them full size. Lack of clarity is due to less than ideal lighting conditions. 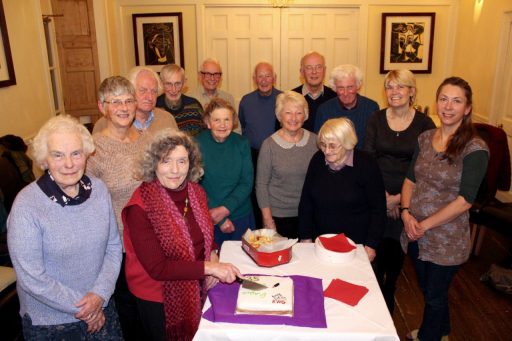 Quite an achievement! Ripon Writers’ Group owes its long existence to the inspiration of founder member Daphne Peters, seen here cutting the anniversary cake. Daphne described how the group had grown out of a Further Education class that she had run which, although doing well, had been axed after two and a bit years. She had been asked to continue running the class privately but did not want to. Starting a Group was the alternative suggested by one of the class members and made possible when another offered the use of her house for meetings. After building up cash reserves from subscriptions, meetings moved to hired venues two years later although there were always cost problems. 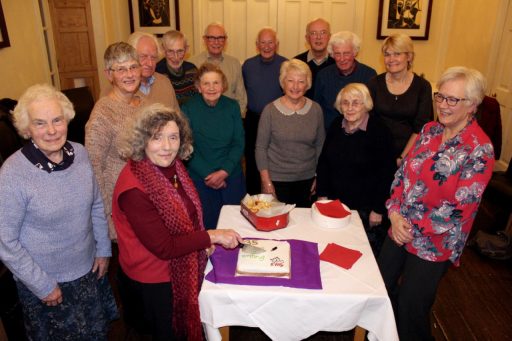 Fifteen current members attended the celebration and six sent apologies. Those who had known the Group over a long period of time shared their reminiscences and everyone was invited to contribute a personal vision of ‘the next 35 years’. 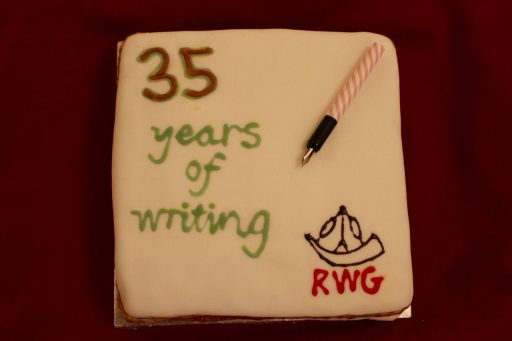 Now the first Ripon Poetry Festival is coming to a close, it’s time to reflect on how well it went for Ripon Writers’ Group.

First, a big thank you to everyone who contributed to our ‘showcase’ event this afternoon, especially to those members who were free to come and read out all our pieces. The wide range and differing styles of our poetic efforts seemed to go down well with the audience, as there really was something for everyone to enjoy – and they appeared to do so.

Last night some of us saw Elizabeth Spearman and David McAndrew in their guise of judges in the festival poetry competition. What an amazing range of work for us to listen to. The evening was full of happy, smiling faces, so well done with your choices, Elizabeth and David!

Today we saw David again alongside Ian Gouge, who along with Andy Croft were reading from their latest publications. It felt to me that the audience were responsive to the depths and nuances in David’s and Ian’s work, and hopefully would purchase some in order to study and reflect on it later, as it deserved.

Last but definitely not least, Anna’s talk about how she had compiled her ‘Rural Voices’ stories from Nidderdale was a delightful hour of dialects, old photographs and Dales characters reminiscing. Anna quoted something to us during her talk- ‘stories connect us, they build bridges’. With her oral history compilation, she has undoubtedly provided us with a bridge that will take us back in time, so that ‘times past’ will not be ‘times forgotten’.

Thank you all for your efforts over this weekend. I feel very proud to be your Chair!

Summer Outing to Kingston upon Hull

The rain didn’t stop a coachload of RWG and Bedale U3A members from enjoying their day, efficiently organised by Susan Perkins. As you can see from the above photo, Hull’s status as City of Culture 2017 has attracted very many extra visitors this year. 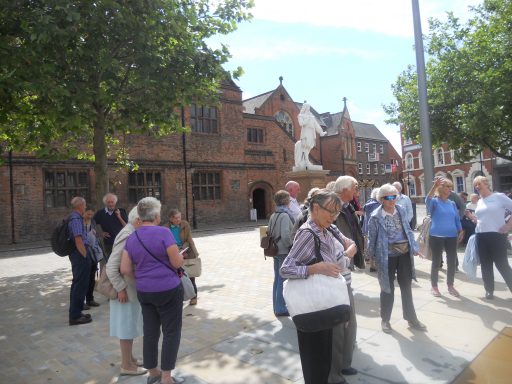 There was plenty to see and do, so people went their own separate ways for most of the day. 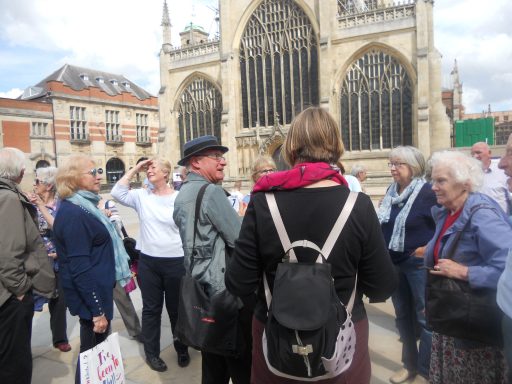 Some chose to admire the architecture of the 14th century Holy Trinity Church, now Hull Minster. 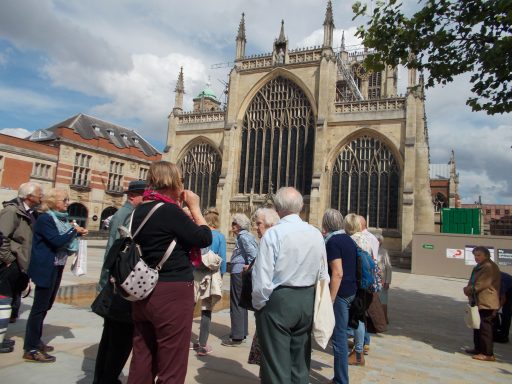 It is the oldest brick-built building in the city and there are claims it is the largest parish church in England. 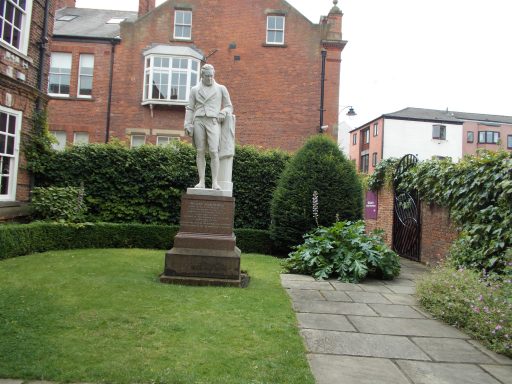 The politician and philanthropist William Wilberforce is one of the city’s most famous sons. Wilberforce House charts the history of slavery and its eventual abolition.