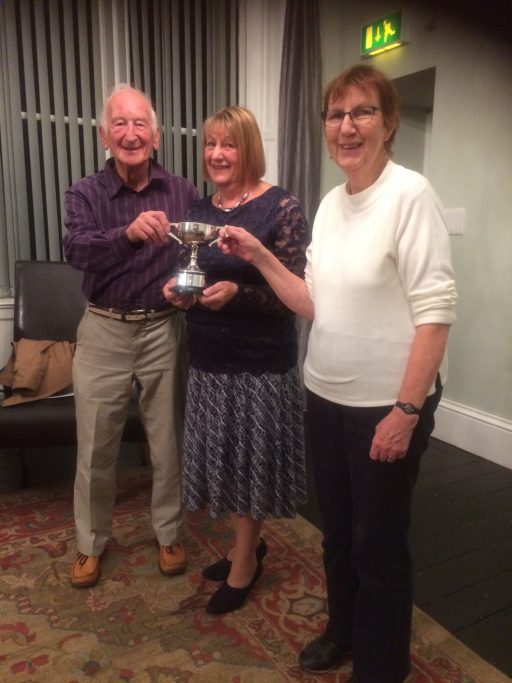 Jill Freeman began by explaining that she was there because the Competition trophy had been donated by her mother. Unlike many in her family she was not a writer herself but more of a story teller in the oral tradition. She went on to detail what she was looking for in her adjudication, concluding by summarising her thoughts in a mini saga of her own.

After the introduction Jill gave her individual comments on the nine competition entries and announced the results as follows:
• Joint Second – Phil Cook with ‘Maybe or Maybe not’ and Carol Mayer with ‘Early Electric? Save Your Breath’
• Winner – Maggie Cobbett with ‘Couple Separated by Heartless Social Workers after Sixty Years Together’
In Maggie’s absence Jill was unable to present the trophy but a suitable picture of her with the runners up was taken for the website.

The nine entries were then read as follows:
• Carol – ‘Early Electric? Save Your Breath’ – a reflection on the fact that successful electric traction predates diesel
• Phil – ‘Maybe or Maybe not’ – a punning reflection on the current uncertainties in the UK political scene
• Maggie (read by Sheila in Maggie’s absence) – ‘Couple Separated By Heartless Social Workers after Sixty Years Together’ – a civic dignitary responding to the newspaper headline of the title gets the opposite response to that expected when he arranges for the couple to be reunited
• Claire – ‘Metamorphose’ – a reflection on the life cycle of an insect
• Caroline – ‘Heart’s Desire’ – the breakfast-time reflections of an unhappy king
• Julie – ‘The Morning After the Night Before’ – a woman who has seduced one of her staff reminds him sexily that he mustn’t be late for work
• Janet – ‘The Reluctant Muse or Love’s Labours Lost’ – a dialogue in which a woman refuses The Bard’s advances
• Sheila – ‘Going Bye’ – a golfer misses his wife’s funeral to play in a key competition match
• Peter H – ‘Worldchange’ – the impact of a caveman accidentally discovering fire

Jill then rounded off her adjudication by telling the story of a short story competition she tried to enter but was thwarted by not putting enough postage on the envelope.

Sheila expressed the Group’s thanks to Jill for her adjudication.