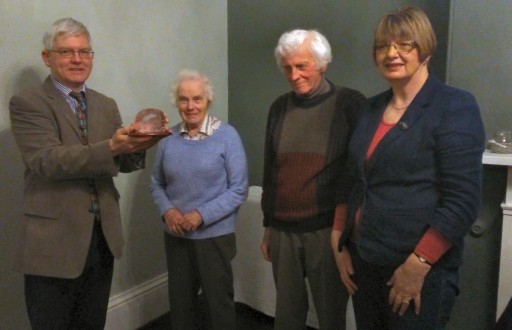 Unfortunately, Lindsay Trenholme wasn’t present this evening to receive the trophy for her winning story, Openings. Adjudicator Gary Booth is pictured here with Susan Perkins, who came second. Also in the photograph and in joint third place are Janet Barclay with Sunday Treat and Joe Peters with Into A New World.

In welcoming Gary, Sheila recalled the helpful and encouraging comments he had made the last time he adjudicated for us, particularly about the importance for a writer immediately to capture the interest of the reader.

On this occasion, Gary began by saying that currently his main private reading was of non-fiction, but in the past he had enjoyed many short stories and was glad to immerse himself in them again, even though nowadays they had become the Cinderella of fiction. He had had to ask himself: What is a short story? What makes a good one? Besides the more mechanical elements of punctuation and the structure of sentences and paragraphs, important features usually involved the inclusion of only a small number of characters; some dialogue; the setting; and the knowledge that something will happen, so that the story builds up to its ending. A “moment of change” was often regarded as vital.

However, it was perfectly possible for good stories to lack some of those features, provided the writer found the right mix for the particular subject matter and achieved the right tone for the story overall and made the reader want to read it. Success could be achieved by exploring and revealing human nature or illuminating something ordinary in a different way.

Gary then handed out a brief summary sheet of the 15 competition entries and went on to comment on each, having attached his personal observations to each individual story. He said that he had enjoyed all of the stories and found them to be of a uniformly high standard. Adjudication had thus been a difficult matter, but after several readings he found that the winning entry and the runner-up were clearly in his mind. He had more difficulty in choosing between two stories for third place, so declared them jointly successful.

Susan then read her story in which various sources allow the reader to piece together the poignant history of an elderly man as he settles into a care home.

Sheila expressed the Group’s warm thanks to Gary for an enjoyable and instructive adjudication.