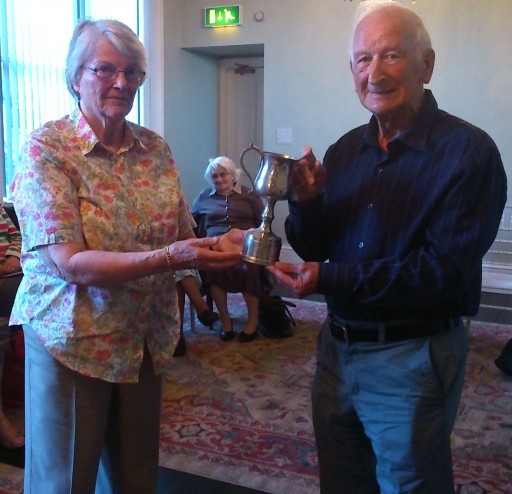 The winner was Phil Cook, seen above with adjudicator Ruth Elwin Harris, who described herself as a ‘lapsed’ writer’. In the past, she had penned Sisters of the Quantocks, a quartet of novels for teenagers, and published Billie:The Nevill Letters 1914-16 from a collection of correspondence she came across in the Imperial War Museum.

Turning to the eleven competition entries Ruth said that she had paid more attention to the subject than to the writing. Inevitably her choices were subjective but she said she had looked at four particular things:
• The piece needs to be well written
• The piece needs to be well constructed with a beginning, a middle and an end
• She liked to be made to think
• She felt that presentation was important

Having expanded on her methods Ruth gave her individual comments on the entries before announcing the winners.

First – Phil Cook with ‘Truth and Memory’, inspired by the WW1 exhibition currently on at York Art Gallery.
Second – Peter Page with ‘Atmosphere and Story’, a plea to artists to transcend mere technique and stir the viewer’s imagination.
Third – Cathy Grimmer with ‘Devaluing Creativity’. In Cathy’s absence her article was held over to be read at a later date.