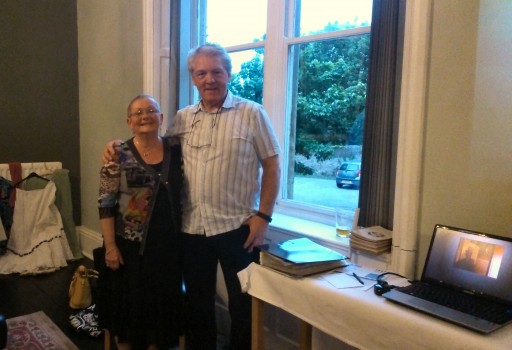 Jonathan Trenholme and Pam Grimsditch of The Masham Players delighted a packed room with anecdotes about the ups and downs of amateur dramatics. Pam opened proceedings by reciting Joyce Grenfell’s Nursery School monologue and A Wayne in a Manger by Gervais Phinn.

The Masham Players celebrate their 70th anniversary this year and Jonathan, who joined in 1972, is very proud of the fact that his family has been involved since the mid-1950s. The main part of the talk, illustrated with slides, props and costumes, followed the process of a production from choosing the play to performance. It was accompanied by references to the Players’ successes in drama festivals as well as rueful asides about things that had gone wrong on the night.

Jonathan concluded by saying that the Players’ next programme would be two one act plays put on jointly with their sister group from North Stainley, where performances would be on 1st and 2nd July. Performances in Masham would follow on 7th and 8th July.

After a break for refreshments, Jan was recruited to help Jonathan and Pam perform a short piece about an old couple. Jan then handed over a token of RWG’s appreciation for the talk before opening the meeting to questions.