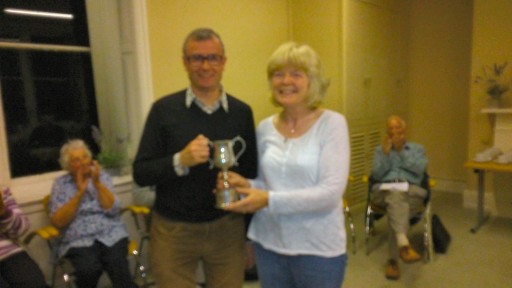 Graham Chalmers, Weekend Editor of the Ripon Gazette and its sister papers, adjudicated for us for the first time. After giving considerable insight into his journalistic background and approach to judging, he provided valuable feedback on each of the twelve entries.

The winner of the competition was Lindsay Trenholme with ‘The Rose of York’, an imaginative story with a background of intrigue at the court of Henry VII. Peter Page’s ‘The Art Show’, inspired by visits to a couple of local shows and the nursery rhyme ‘Little Miss Muffet’, came second. Eileen Walters was third with ‘Portrait of a Tree’, the tree in question being one which meant a great deal more to her than to the neighbour who owned it.

Graham also commended Susan Perkins for ‘My Enlightenment’ and Cathy Grimmer for ‘A Fair Bargain’.

Following the presentation of the trophy, all five of the above members read out their entries.