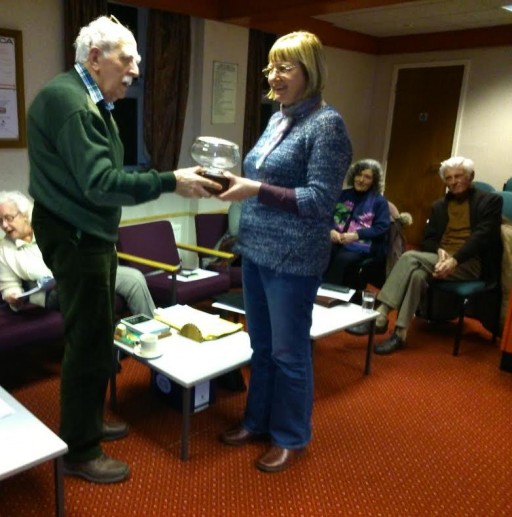 The Jack Moss trophy was won this year by Susan Perkins for Nice Cup of Tea? in which she explored the history of our national beverage and appealed for everyone to consider the conditions endured by many tea pickers. Ethically sourced tea is widely available these days from organisations such as the Rain Forest Alliance and under the Fair Trade label.

Adjudicator John Lee, who’d given us an amusing account of his career in education and marvelled at how a retired physicist had been chosen to judge the competition entries,went on to award second place to Phil Cook. Phil’s Down With Holidays, a very tongue in cheek rant about the horrors of planning, preparation and travel, not to mention the frustrations often encountered at holiday destinations, struck a chord with us all.

A more serious piece took third place. Out Of Africa was a memoir by Joe Peters that interwove his own experience of teaching Afrikaaner children in The Hague with the establishment of the apartheid regime and the imprisonment and unexpected but widely acclaimed release many years later of Nelson Mandela.

John said that he had enjoyed reading all fourteen very different entries for the competition and congratulated the Group on the high standard of writing overall.